Measuring with a plain ruler and marking fractions

Learning how to properly use a ruler is the basis for just about everything involved with laying out a stage, scenery, lighting, etc. This video shows how to use a standard 12 inch ruler and mark out the fractions down to the 32nds of an inch. 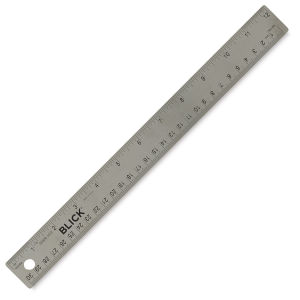 This is a copy of the computer generated transcript. It’s not been corrected yet.

[00:00:00.750]
Here we have a standard inch ruler. It’s a 12 inch ruler. And we’re going to look on how it works. Here we have zero the zero market, a one in tomate and a two inch mark, three, four, five, six and so on, the two line and the three line and a four line and one line, the whole numbers are the longest rule or lines. Here is lines. The next length divide these two directly in 1/2″.

[00:00:37.440]
So this is referred to as the 1/2″ mark. So if we have a whole line here. And here. And this is going to be the 1″ 1/2″ mark. Halfway, it doesn’t matter where they are, they could be between these guys and this line here is still going to be the halfway line. So we’ve got on this case two and a half inches, three inches, three and a half inches. Four inches. And one inch and zero, obviously, between the hole number and the 1/2″ number, if we divide that in half again, let’s say we take 1″ 1/2″ and we divide that in half, divided by two equals one quarter.

[00:02:30.600]
We already know we have a 1/2″ there and we’ve got two quarters here. In between those, we’ve got these even smaller lines, so here’s the 1/2″ is the longest quarter and this one year between the the quarter, that’s an eighth because there are eight parts in between here, just like in the quarters. We had one, two, three, four quarters. Here we have one, two, three, four, five, six, seven, eight.

[00:05:24.810]
So all these numbers mean the same thing when you get to the eight, 16 to two over four two quarters for AIDS or 1″ 1/2″, those all mean the same things. But when you get in between them, when they’re an odd number, you have to use the whole thing. So when they’re odd numbers, you can’t reduce them. Whether even numbers you can. Now, let’s look at this other end of the scale, so here we are dealing with the 30 seconds.

[00:07:50.880]
So that’s how you use the 30 second marks within the front inch. Now, there are some laws that if you’re working with a ruler that has all of them because you’re doing a lot of precise work, you might have that. But this ruler here is a relatively generic ruler. So it’s only the first inch and that’s how you need to deal with it. So please like and subscribe and leave a comment down below. It helps us a lot in our outreach and let us know what else you’d like to learn.