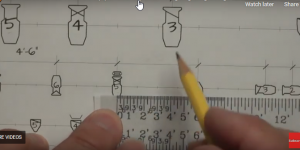 Including lighting unit dimensions will save you a lot of time during your load in time. You don’t want to have technicians measuring with a scale ruler each time. Here I show how to use a scale rule on a pipe full of lights to add Dimensions Between Lighting Units

Your subscription could not be saved. Please try again.
Thank you. Please check your email for the link to the download page. We send this to avoid bots and reduce spam.

Transcript of my video showing Dimensions Between Lighting Units:

One two number three, four here, you’re going to use your 1/2″ scale here, you use your quarter inch scale. We’re going to measure the distance between the lighting units. Put the date and your name. A couple of questions to answer right there. And then a column to fill in the quantities of the lighting units on this little sample Light plot. We have a key here and these symbols tell us what all these symbols mean here.

So we have here are lighting it with an X in it. Over here we have an X that stands for a 19 degree unit. This is a PAR symbol. This is what tells us that it’s a PAR and so on, the lighting units are numbered from right to left, because when we’re dealing with a plot, we deal with from stage left to stage right. So this is one, two, three, four, five and so on.

So some samples, there’s an example here of exactly how we want to write down our dimensions, the distance from the center of this light to the center of this light is one foot six inches. Now, the dimensions are always measured from where the C-Clamp is to where the C-clamp is, on center to center on a standard unit that has a single C-clamp. So that’s the distance here. One foot six and the distance between four and five is three feet.

So if we take the example on different pipe, we’re going to move to the quarter-inch symbols. You see how these are much smaller than these symbols. They’re actually half the size this we’re using a quarter inch square. And in this case, we’re in our quarter and scale. So I’m going to fold the piece of paper and lay it down right here. And measure the distance between this unit and this unit to put a center one, two, three, four, five, six feet.

We have one, two, three, four, four feet, six inches distance. Using our quarter inch scale ruler here, we have a zero, two, four, six, which means that this is one foot, two foot three feet, four feet and so on. So here I lay this right down here. the distance from this light, that light moving up to these reference lines there, is zero, one, two, three, four, six inches because it’s between those two or more accurately, if I move it over to the left line at the four feet, this mark, four, three, two, one, zero.

And then we use the small lines here. And right here in the middle is the six inch line. Same thing happens with the half inch scale, but I have to turn the ruler over. Here we’ve got zero, one foot, two feet, three feet. For here, we put the one foot mark here, zero and then six inches right in the middle of here. And that’s how we use our scale or on our worksheet. To use the whole worksheet as a practice sheet, simply measure the distances between all the units, use the appropriate scales and write the number in just like I did here, use a nice, neat lettering and keep it clean.