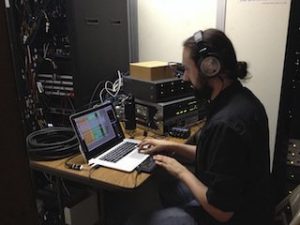 He has also designed aerial and aquatic spectaculars for Royal Caribbean, an immersive show, Queen of the Night, at the Diamond Horseshoe (with Darron L West), and collaborated on installations with artists Anne Hamilton, Abelardo Morel and Luis Roldan. He frequently co-designs things with Nathan A Roberts. He has worked as an associate on manyBroadway shows including Peter and the Starcatcher (Tony Award® winning Sound Design); The Elephant Man; In the Next Room (or The Vibrator Play); and Vanya and Sonia and Masha and Spike. He teaches at NYU and The Yale School of Drama, and is fascinated by how technology can support live performance without interfering with the humanity and reactive nature of a live show. He also has a mostly well behaved dog named Max.