Super Saturday Faculty From Past Years 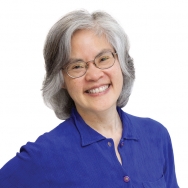 Dawn Chiang designed the lighting on Broadway for “Zoot Suit”, was co-designer for “Tango Pasion”, and associate lighting designer for “Show Boat”, “The Life” and the original production of “La Cage Aux Folles”. Off Broadway, she has designed for the Roundabout Theater, Manhattan Theatre Club, and co-designed the first two seasons of the “Encores!” concert musical series at City Center.

Dawn was resident lighting designer for New York City Opera, where her designs included “A Little Night Music” and “Fanciulla del West”. She is the lighting designer for the award winning FDNY Fire Zone at Rockefeller Center, New York. She has worked on the concert tours of Paul Anka, The Carpenters, Diana Ross, and Loggins and Messina.

She has served on the board of directors for Theatre Communications Group and is a mentor for the Theater Development Fund’s “Open Doors” outreach program to New York City high school students.

Dawn is a senior consultant with Theatre Projects Consultants, where she served as project manager for two of the largest water based permanent shows — “House of Dancing Water” in Macau and the Han Theatre in central China.