Sonny Sonnenfeld lived a full life and passed away at 96 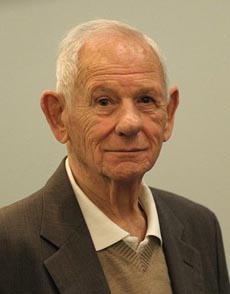 Industry icon Sonny Sonnenfeld died today. He was 96. In 2014, Lighting&Sound America wrote, "There is no more indelible personality in the lighting industry than Sonny Sonnenfeld." The legendary salesman and educator mentored many of the key figures in today's lighting industry and participated in the startup of many key industry companies. He was also a commentator (and sometime gadfly) for many industry publications.

Beginning his career at a time when entertainment lighting was dominated by a small number of conventional lighting manufacturers, he saw the industry transformed several times over, by the advent of automated lighting and LEDs, among other developments. His passing represents the end of an era, when the major manufacturers had offices in Manhattan and sales reps had close personal relationships with the designers working on Broadway and in television.

Born on September 29, 1919 in New York City, Sonnenfeld was first drawn to the theatre while attending Cejwin Camp in Port Jervis, New York; the camp's technical director asked him to help move a piece of scenery, and the first of many business relationships was struck up. Reminiscing to LSA in 2014, he said, "I became his assistant at the Central Jewish Institute, which was affiliated with Cejwin Camp. I then went to the 92nd St. YMCA [as technical director] after Abe Feder and before Tharon Musser. I followed my brother, Irving, on the stagecraft squad at DeWitt Clinton High School. I lit dancers and plays at the Y, but I really knew very little about what I was doing until someone lent me a copy of Stanley McCandless' A Method of Lighting the Stage."

Sonnenfeld's budding career was interrupted when he was drafted into the army in October, 1941. He served in World War II, spending three years in Australia, New Guinea, and the Philippines and earning a Silver Star. His formal education after high school consisted of one year of night classes at Cooper Union.

After the war, Sonnenfeld applied to the Broadway producer Kermit Bloomgarden for a job as an assistant stage manager for the play Deep Are the Roots. The play was set in the deep South and the job included a three-line role as a deputy sheriff; because Sonnenfeld couldn't master a southern accent, Bloomgarden sent him to Ed Kook, president of Century Lighting. He was hired as a "sales engineer," covering the theatre, television, and architectural markets. "I consulted with architects, store designers, theatre groups, hotel designers, and electrical engineers in the design of theatres of all sizes all over the world," he said. McCandless, who was head of R&D at Century, schooled him in the business. "He really taught me about architects and architectural lighting. I could not have asked for any better training."

Sonnenfeld stayed at Century Lighting for 16 years, then left to become a founding partner in the firm Lighting&Electronics. When the company filed for Chapter 11 in 1965, he went to work as a rep for several companies, including Strand Lighting, Colortran, Wybron, and GAM, as well as a number of architectural lighting companies. He ran his own firm for a number of years, then was hired by ETC in the mid-1990s. He retired in 2004, with a grand party, sponsored by ETC, at Sardi's, attended by many industry notables. A year later, he surprised the industry by un-retiring and going to work for Strand Lighting. He also operated another rep firm, Entertainment Lighting Reps, with Chris Beck.

Sonnenfeld also played a key role in many industry organizations. He joined the Illuminating Engineering Society when at Century, and ultimately became president of the New York section, as well as chair of the theatre subcommittee. He was a founding member of both USITT and USITT's New York section. In March, he was to receive USITT's 2016 Distinguished Achievement Award in Lighting Design and Technology. In 2003, he received The Wally Russell Foundation's Wally Award, for lifetime achievement.

Famed for his ability to sell, and for such techniques as showing up at a client's office armed with bagels and the latest industry gossip, Sonnenfeld told LSA: "My creed as a salesman, as well as in life, is a simple one: 1. Respect your customers. 2. She/he is probably smarter than you are. 3. Never fake it. Say, 'I don't know, but I will find out and get back to you' -- and do so. 4. Be honest; don't lie. 5. Start early and work late. 6. Make friends with your customers. I have become friends with some spectacularly wonderful people." Many in the industry have stories to share about phone calls and faxes from Sonnenfeld, offering impromptu advice, constructive criticism, and career direction.

Sonnenfeld was married twice. His first wife, the former Kelly Kellerman was a well-known industry figure. He retired to Las Vegas with his second wife, Rose, returning to work after her death. He is survived by his companion, the lighting designer Jennifer Tipton; his son, the film and television producer/director Barry Sonnenfeld; a daughter-in-law, Susan, and a granddaughter, Chloe. Sonnenfeld requested that there will be no funeral. A memorial party will be announced at a later date.